Halley Elementary School opened on September 5, 1995, and was dedicated on May 16, 1996. Our school was designed by the architecture firm of Walton, Madden, Cooper, Robinson, and Poness, and was built by the Sabre Construction Company at a cost of $7.6 million.

What's in a Name?

During the design and construction process, Halley was referred to as the Pohick elementary school site. In March 1995, community members gathered at a meeting to name our school. Prior to the meeting, future Halley student Brian Love and his mother visited the Fairfax County Circuit Court Historic Records Center and the Fairfax County Public Library's Virginia Room to research the history of our area for potential names. During their research, they learned about a man named William Halley who once lived in the Lorton area, and suggested his name at the community meeting. The Love's suggestion became the favorite among those in attendance and was put forward to the Fairfax County School Board as the community's preferred choice. On May 11, 1995, the School Board officially named our building "The William Halley Elementary School." Who was William Halley and why did he spark the Love's interest? Find out in this video produced for Fairfax County Public Schools’ cable television channel Red Apple 21.

Take a look back at some moments in Halley’s history. This video playlist includes stories about the Prevent, Act, Resolve (PAR) character education program, our partnership with Vulcan Materials, The Whistle Blowers, and The Bully Nots. Halley's innovative PAR program became the model for the Positive Behavioral Interventions and Supports (PBIS) program in use today in FCPS.

Did you know that in 2001 Halley Elementary School won a national contest? The contest called for suggestions on how to encourage students to prevent bullying. Halley was selected from among 120 schools by Michigan author Patricia Polacco, who devised the contest. Ms. Polacco presented the award in person and joined students in painting a mural on the wall of our library.

The tiger shark that hangs in our library is a real shark. It measures 13 feet, 11 inches in length and was caught by the Chapman family in August 2004. Jack Chapman, then a second grader at Halley, was visiting the Outer Banks of North Carolina on a fishing trip with his father Scott and older brother Josh when they hooked the shark. Four hours later their fishing boat returned to shore and the whole town came out to see their tremendous catch. The shark was sent to a marine taxidermy specialist in Florida and then sat on the Chapman’s couch in their living room for a few months until Jack’s mom, Sharon Chapman, decided she didn’t want it in her home anymore. Mrs. Chapman offered the shark to Principal Funk who jumped at the chance to have it. 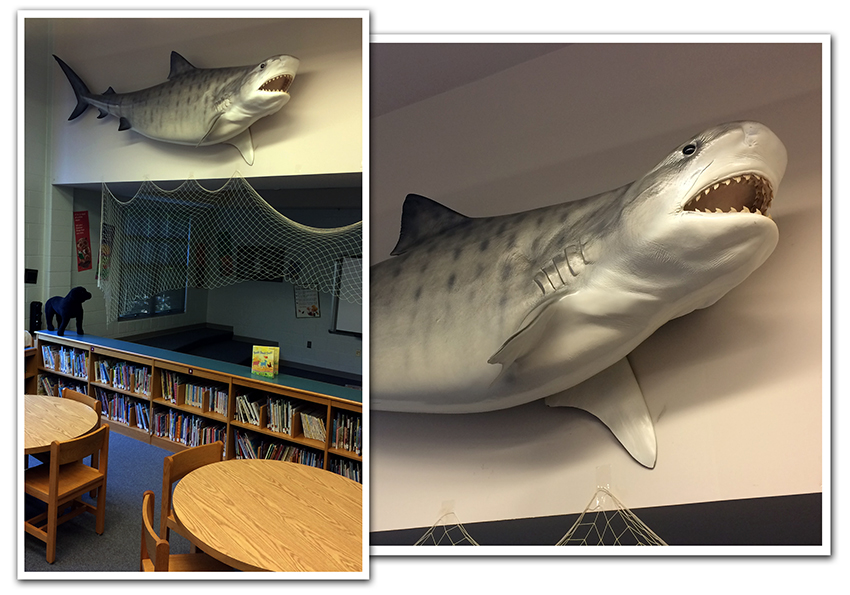 Principal of the Year

In November 1998, Principal Janet Funk was selected as the FCPS Principal of the Year and was the recipient of the Washington Post's Agnes Meyer Distinguished Educational Leadership Award. This award recognizes principals who go beyond the day-to-day demands of their positions to create exceptional learning environments for their schools. One nominating letter stated: “Mrs. Funk amazes all who know her when she addresses every student by name. On any given day, one might see her parading with the kindergarten class wearing a homemade Spring bonnet… dancing at a sixth grade dance, reading a book with a child, or playing the flute in the school band.” Principal Funk was also lauded for her work with the community, including organizing monthly “coffees” with parents and surveying them to get their thoughts on school planning. Additionally, in 2000, Principal Funk was the recipient of the School Bell Award from the Virginia Association of Elementary School Principals for her significant contributions to FCPS and to Halley Elementary School.